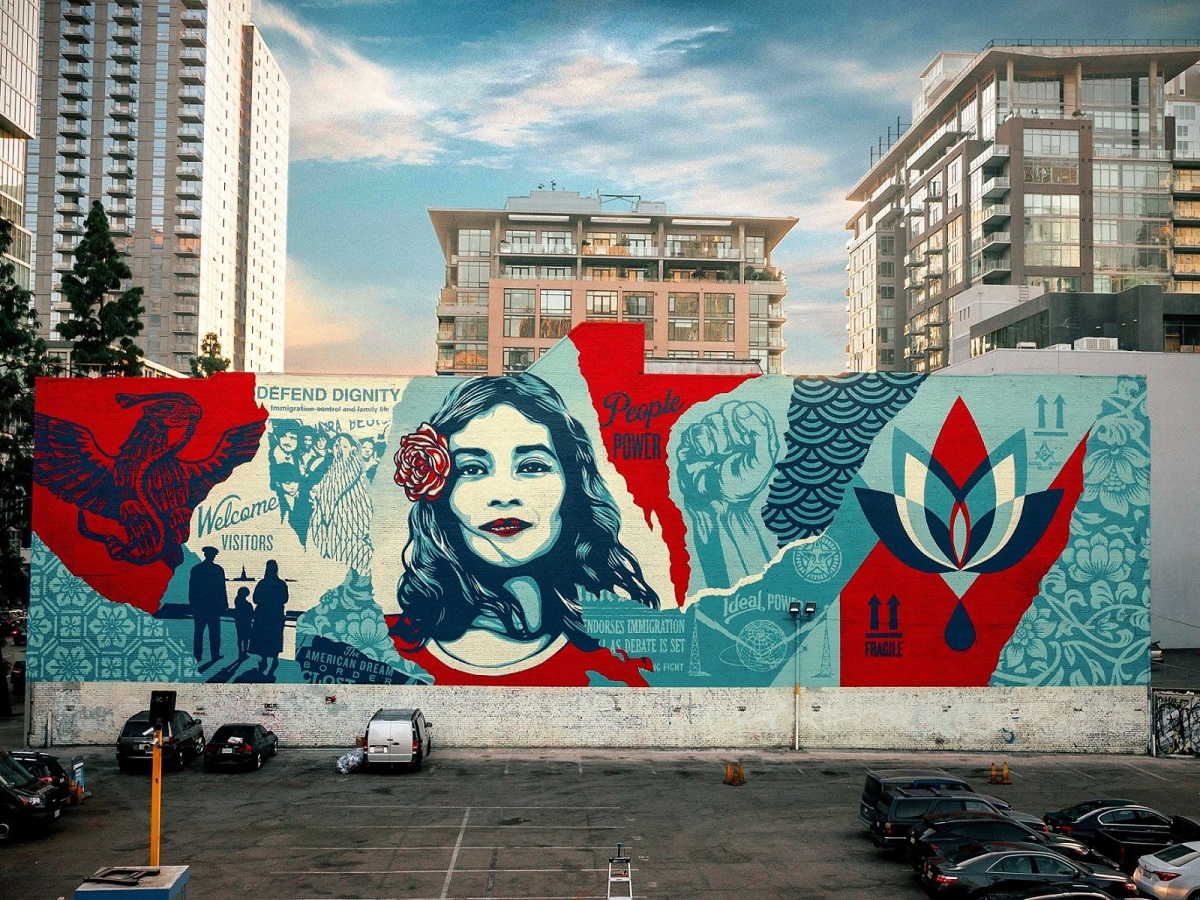 The increase of public visits in art galleries is a positive aspect of the COVID period. And one of the most presented art movement at the moment in galleries is Street Art: contemporary, fresh, colorful… Exactly what we need currently. And sales are booming! Let’s see what are the top 5 artists to focus on when it comes to street art.

When it comes to urban art, everyone knows that’s a visual art created in public locations. But that’s important to explain the difference between street art and graffiti art. First one is image-based, legal and commissioned, while the second is word-based and illegal and chased. Most of time street artists started with graffiti and became famous thanks to their talent and peers’ recognition.

Street art has a history of approval for improving and uplifting areas of the town or city, and recognized artists are often called upon to put together these artworks. This being said, graffiti and street arts have their place among the contemporary art forms and generally, they can be seen side by side in the same vicinity.

In this article, I would like to highlight 5 street artists that I particularly like and whose artworks are really unique pieces for a home interior. As an art collector, I also have to precise they represent a very good money investment!

JonOne (born John Andrew Perello, 1963), also known as Jon156, is an American street artist. Originally from New York, he lives and works in Paris. His introduction to street art began when he would see graffiti and tags on subway cars and city walls. When he was 17 he entered the world of graffiti with his childhood friend “White Man,” tagging his name Jon with the numbers 156 on walls and trains in his neighborhood. JonOne said, “The subway is a museum that runs through the city”.

In 1984, JonOne founded the graffiti group 156 All Starz, in order to bring together their passion for painting trains at night and to help forget about their problems, including drug use. He moved to Paris in 1987 and made a name for himself in Parisian artistic circles through his work on canvas and the exhibitions he held.

Fernando Carlo (also known as Cope2) is an artist from the Kingsbridge section of the Bronx, New York. He has been a graffiti artist since 1985, and has gained international credit for his work. In 1982 he made his own crew called Kids Destroy and eventually it changed to Kings Destroy after he dubbed himself “King of the 4 Line”. Cope2 is well known for his “throw-up,” given to him by Cap from Style Wars, and is also a user of “wildstyle” graffiti, a style which originated in the Bronx.

Cope2 has achieved considerable mainstream success for his artwork and has collaborated and released many projects alongside such names as Adidas and Time magazine.

M.Chat is the name of a graffiti cat that originally appeared in Orléans, France in 1997. The graffiti appeared most frequently on chimneys, but was also sighted in other places, such as train platforms and at political rallies. The artist was originally anonymous, but in 2007 Thoma Vuille (Belgian) was caught in the act of creating the cat. The yellow cartoon cat is characterized by its large Cheshire Cat grin.

Today we can find Thoma Vuille’s yellow cat in worldwide walls: Paris, Seoul, Hong Kong, New York, Belgrade and even in Vietnam. His original paper and wooden board works are soldout almost immediately when released.

Frank “Shepard Fairey” (also said OBEY) is a very famous graphic artist, muralist, and overall artist. In 1988, the artist graduated from Idyllwild Arts Academy in Palm Springs (California). He then earned his Bachelor of Fine Arts from the Rhode Island School of Design in Providence (Rhode Island) in 1992. At that time, Shepard Fairey held a part-time job in a skateboarding shop and he hit the skateboard community hard by pasting homemade stickers all over the place. It was then that he realized his desire and interest in the street art culture and graffiti movement.

Shepard Fairey is one of the most influential street artists of our time. He has constantly shifted between the realms of fine art, commercial art, street art, and even political art. One of the first images he ever used was that of Andre the Giant, and that’s still today an iconic piece of his art.

Chanoir, a.k.a. Alberto Vejarano, is a contemporary French-Colombian street artist born in 1976 in Bogota. He became very active in the streets of Barcelona in 2000s, where he framed the documentary Murs Libres. In 2002, he became the founder of Collectif 1980 with other artists such as Jean-Philippe Illanes, Alexandre Sirvin and Hugo Garcia. His nickname is a reference to a poster of the famous Parisian cabaret Le Chat Noir, by Théophile Steinlen.

His artworks, on all kind of surface (he particularly enjoys walls and stores’ metal curtains), is very colorful and positive. It represents usually one or more “CHA”, his favorite character derived from a cat figure.